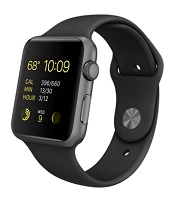 This Apple Watch buying guide will cover as many details as possible to help you decide which watch series is right for you. Almost everyone will either be interested in the Sport model or the stainless steel “Watch” model. Regardless of which one you choose, they all have the exact same functionality and internal performance. Let’s jump directly into the apps and other features.

The value of this type of device comes down to the software that can run on it. In a sense, it’s all about the apps. Thankfully, the amount of apps has been steadily growing ever since the device was released. During Apple’s conference in September, they stated that there were already over 10,000 apps now available for the watch platform. These cover practically every category you can think of; ranging from games to productivity. You won’t have to worry about the usefulness of your watch with so many apps to choose from.

The first-party apps that are integrated directly into the operating system run really well. You can immediately tell Apple spent a lot of time figuring out the best way to interact with the interface. There’s a new method they developed called “Force Touch” which can sense whether you’re pressing lightly or firmly. I’ll go into more software specifics in the following sections. 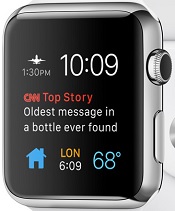 One of the main complaints about the Apple Watch when it first launched was the slow loading of 3rd-party apps. This was because every app had to run on your iPhone and the data was then streamed to the watch. This caused for some long loading delays.

Those issues have been alleviated with the release of WatchOS 2! This new software update enables 3rd-party apps to run natively on the watch without the need of the iPhone. Data is no longer streamed into the watch which allows the apps to load much faster. Most major apps should already be updated to run natively.

Developers now also have access to more functions like the microphone and crown. You should expect to see improved performance and functionality with apps in the future. It’ll be interesting to see what new uses they can come up with.

There are several different watch faces available and each one has their own customization settings. My favorite are the new time-lapse ones, which show a sped up scene from a famous location. What makes it even cooler is that it’s time dependent. So if you check your watch at night it’ll show a nighttime scene. Hopefully Apple continues to add new locations in future updates.

There’s also many other fun choices and sophisticated options to choose from if that’s more your style. There are many ways to make the watch feel unique since there’s such a wide range of watch faces.

I think the fitness aspect is one of the main reasons why most people decide to get an Apple Watch at the moment. It keeps track of your heart rate, tracks multiple types of exercises, and can give you alerts to remind you to workout. You can even earn virtual medals for your fitness accomplishments. These help motivate you to reach new goals.

As I mentioned earlier, internally every model is identical. They only differ in the material they’re built out of. There’s a pretty big price difference between the two models. This is where your personal preference will come into play since it’s strictly a vanity decision. Which looks better to you?

The first choice is the Sport model which is built using 7000-Series aluminum and Ion-X Glass. Apple says the metal is 60% stronger than regular aluminum.

The second option is the Watch model which is built using Stainless Steel and Sapphire Crystal. It’s shiny compared to the matte appearance of the Sport model. The crystal is also supposed to be even more durable than the Ion-X Glass. Both are splash and water resistance though.

The included standard band is made of rubber(fluoroelastomer). You do have several band choices ranging from many different colors and materials. The bands can be used on any of the watch series but they must be paired with the same watch size. So a 42mm band will fit both a 42mm Sport or stainless-steel Watch.

There are several 3rd-party bands you can buy that are a bit cheaper than Apple’s options. I’ll include a few links to those below in case you’re interested in customizing your watch even further. These can be bought at any time in the future if you decide you want to make your watch a bit flashier.

I think the main hesitation people have when looking to buy one of these is that an iPhone can handle most of the same tasks. The Apple Watch is a device that you’ll always have on you though. It can be more convenient to use in many situations over your iPhone. I also love the way it gives you subtle notifications via vibration during those times when you don’t want to disturb anyone else.

Overall it’s a great accessory to have, especially now that 3rd-party apps run much faster. There’s constantly new functionality being added from updates and the many developers that are working on building apps for the device. The Sport model is an extremely popular choice and offers the same functionality as the more expensive options. Either way I feel like most people would be really pleased with either model and it comes down to your personal preference. I’d recommend narrowing down the model you want, then which band fits you best, and finally whether you want the 38mm or 42mm size.

They currently have a few different variations available on Amazon if you’d like to click the following buttons and view the latest prices.

"As an Amazon Associate I earn from qualifying purchases."